Relight a Piolot Light on Your Hot Water Tank 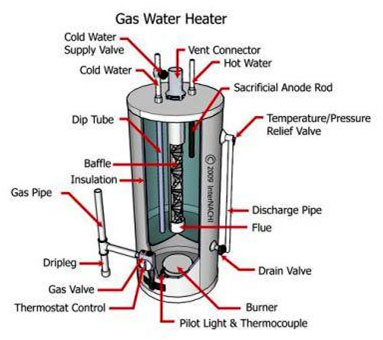 Going into the colder season, our water heaters are often utilized to their maximum output. And during the cold season, the wind that picks up can really wreak havoc on gas water heater pilot lights.

Once your pilot light goes out, it is usually a simple task to get it re-lit again. The following is a detailed image of a gas water heater complete with names for all the major parts.

The gas valve pictured below is where you will start when your water heater pilot light goes out. The first thing you want to do is to turn the water heater’s gas supply off – note, the green arrow pointing to the word off.

Next, turn the temperature dial above, on the face of the valve, to the “Vacation setting”. You are now ready to access the burner area below.

As you can see, the pilot light is accessed through the small opening located towards the bottom of the tank. 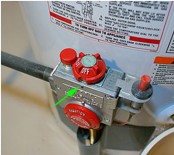 Note, the therm-couple above is equipped with an igniter. This current model will also have a sealed burner area which we’ll touch on soon. But other than that, the pilot light on both models is exactly the same. 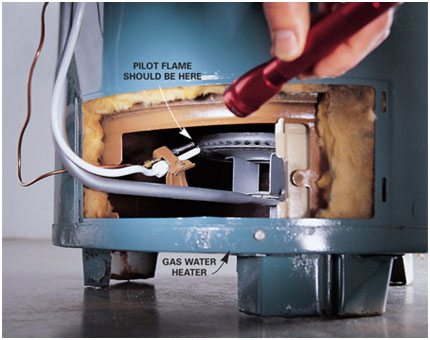 On both types, the first step is to move the dial on the gas valve from off to the pilot setting. You will notice that in this position, the half-moon cutaway on the on-off control dial is now aligned with the pilot button. This button is to be pressed down and held during the entire relight process. You will know that the control dial isn’t completely in the correct pilot position if the pilot button will not go down.

To re-light the pilot on an older open burner system, you will hold a long match or lighter, under the pilot opening while 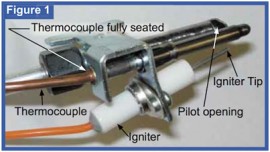 For a sealed burner, proceed exactly as above except, to light the pilot, you simply press the igniter button pictured above. Note: with a sealed system, you won’t have easy access to the burner area and won’t use a match – the igniter button will do the lighting. On sealed burners you almost need to stand on your head in order to see the pilot light’s position in the dark. In fact, many times a pilot may have actually lit but just cannot be seen. 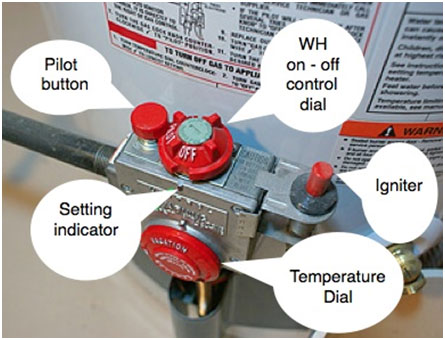 After the 60 second wait, slowly release the pilot button. If the pilot is still lit, then slowly turn the temperature dial up to your desired temperature. Don’t let the sudden “WHOOSH”, scare you. This is what you want to hear as it is merely the water heater firing up again.

When the pilot light won’t remain lit, the problem is usually more than just a blown out pilot light and will need a professional.