A Tour of your Toilet: How it Works 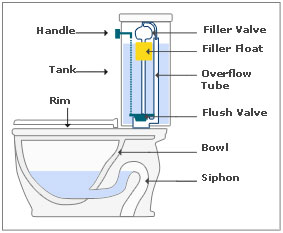 Sometimes, your plumbing appliances are a total mystery. How do they work? What parts are there and why are they needed? At Petersen Plumbing, we want to take the mystery out of your plumbing and shine a little light on how they work, so that you can be prepared and educated about what you need.

So here we present:

A tour of your toilet: In the plumbing world we call a toilet a water closet

Here is how your toilet flushes.

“When the Flush Lever is pushed it pulls up on the Chain, which in turn pulls up the Flush Valve.  This exposes the large discharge hole at the bottom of the tank allowing water to rush quickly into the toilet bowl.  There are two types of Flush Valves.  Older Flush Valves were rubber Balls (see circular insert in figure).  Modern Flush Valves are called Flappers.  The Ball or Flapper Bulb is filled with air, so it wants to float, but the weight of the water on top of it clamps/seals it tightly against discharge hole.  But, once it is pulled away from the hole, water flows under it and it floats.  This holds it open, away from the discharge hole.

Immediately after a flush begins the water level in the tank starts to go down, so the Float starts to go down.  [It’s called a Float because it’s a hollow ball floating on the surface of the water.]  The Float, by way of the rod attached to it, opens the Fill Valve, and water from the house water pipe (through the Stop Valve) begins to flow into the tank.  So, water’s coming in and going out at the same time.  But, it’s going out much faster than it’s coming in, so the tank empties into the bowl quickly.  When it’s almost empty the Flapper can no longer float and falls onto the discharge hole sealing/closing it again.  Now that the discharge hole is closed the water coming in through the Fill Valve starts refilling the tank.  While the tank is refilling a small amount of water is also going from the Fill Valve through the Refill Tube into the Overflow Tube.  The Overflow Tube empties directly into the toilet bowl.  This water raises the water level in (refills) the bowl.  If it weren’t for the Refill Tube there would be only a small amount of water in the bottom of the bowl.”

One Big Thing You Will Want To Know:

Where your toilet’s water shut off is. An overflowing toilet is gross, no matter what. Knowing where your toilet shut off is can save you a really disgusting cleanup after the fact. Toilet water shut offs are normally located behind the tank, a few inches or so off the ground. Remember: CLOCKWISE (closes the shut off) COUNTER CLOCKWISE (opens it.)