DO YOU HAVE A PLUMBING QUESTION?

Are those clogged drains, leaking pipes, and tricky instructions for installing your water tank causing you grief? Contact Glenn today, for all your plumbing needs!

I knew Bob Wright for over 24 years as one of his commercial and marine plumbing contractors. Bob was a man who knew what he wanted and at times he was not an easy man to work for but I grew to respect him, as he did me.  I learned a lot while working for him, what it meant for a man to have a dream, as he certainly did.

One morning I was in Bob’s kitchen when he explained his frustration with the dripping faucet.  Finding parts was always a challenge, as they were old faucets, but he liked their historic value just like the rest of his home, as well as his ship, the Marabell. 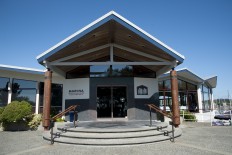 This same morning while I was repairing his faucets, I decided to ask Bob how the Oak Bay Marine Group began. Bob was born in Regina, SK, then as a young boy, him and his family moved to Edmonton, AB during the depression.  He quit school by grade 11 and eventually ended up in Victoria working for the Victoria newspaper for many years.   Bob explained how he always had a love for the ocean and fishing, and how he had a dream to build a marina in Oak Bay.  He said it was all about timing and luck, but I knew it was much more than that.

The marina was built in 1962 and today is known as the Oak Bay Marine Group.  Before Bob passed away, and due to his love of the ocean and fishing he donated 11 million dollars to the University of Victoria. This money went to building the Bob Wright Center, which is for the study of oceans, earth and atmospheric sciences.  Today the Oak Bay Marine Group has 19 operations in three countries.  He left a legacy behind and a man I got to know and will miss.

Below are references that the Oak Bay Marine Group left for me based on the many years service.