Nuisance Power Outages: What to Do 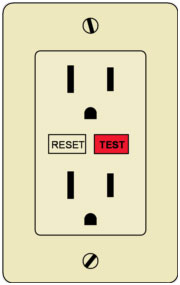 Many of these instances are situations where a Ground Fault Circuit Interrupter, has tripped. And the reason it tripped could have been because someone had something plugged in, such as various power tools that demanded too much power, or water may have come in to contact with the plug.

In most cases, the problem is simple and doesn’t require an electrician to solve it.

The first thing to do is to check your GFCI outlets (see above), To see if the small red (sometimes black), button is protruding away from the face of the outlet. If it is, simply press it back in to place and check your power again.

It should also be noted that, sometimes one or more outlets are connected to a single GFCI outlet thus sharing the same circuit for power. In other words, if the GFCI outlet trips shutting off it’s power, any outlet connected to it also will be without power.

Finally, it’s a good idea to check, at least annually, the functionality of your ground fault Interrupter. This is a safety device installed in rooms where the presence of water could cause a dangerous situation. Should the GFCI ever get wet, it automatically turns the power off to that circuit. Once the area is dry and safe, the outlet can be reset.

The outlet pictured above is called a ground-fault circuit interrupter (GFCI). It’s there to protect people from electrical shock, so it is completely different from a fuse.

The question on appliance plugs talks about fuses. The idea behind a fuse is to protect a house from an electrical fire. If the hot wire were to accidentally touch the neutral wire for some reason (say, because a mouse chews through the insulation, or someone drives a­ nail through the wire while hanging a picture, or the vacuum cleaner sucks up an outlet cord and cuts it), an incredible amount of current will flow through the circuit and start heating it up like one of the coils in a toaster. The fuse heats up faster than the wire and burns out before the wire can start a fire.

A GFCI is much more subtle. When you look at a normal 120-volt outlet in the United States, there are two vertical slots and then a round hole centered below them. The left slot is slightly larger than the right. The left slot is called “neutral,” the right slot is called “hot” and the hole below them is called “ground.” If an appliance is working properly, all electricity that the appliance uses will flow from hot to neutral. A GFCI monitors the amount of current flowing from hot to neutral. If there is any imbalance, it trips the circuit. It is able to sense a mismatch as small as 4 or 5 milliamps, and it can react as quickly as one-thirtieth of a second.

So let’s say you are outside with your power drill and it is raining. You are standing on the ground, and since the drill is wet there is a path from the hot wire inside the drill through you to ground.